I just got married on Saturday. I’m pretty excited about it.

Jason and I had been engaged for so many years that I can’t actually remember how long it’s been.  We’ve been together for ten years in May, and we had finally decided to set a date this last December.*  Neither of us was interested in a traditional big wedding, and we’ll all about DIY over here, so we pretty much did everything ourselves instead of hiring other people.

Over the next few weeks (meaning, when I have time to write everything), I’m going to share a series of posts about the various elements of the wedding, what we did, and how to plan it all in advance so that you don’t actually have to work on your wedding day.  The only thing I should really mention, though, is that we had such a tiny wedding that I know this information won’t really apply to a lot of couples who are having hundred(s) of people show up for their wedding.

For this post, I want to tell you about what we did for the flowers, with more to follow about the rest of the decor, our sweet little vegan wedding cake, how to self-cater everything in advance for a small group. 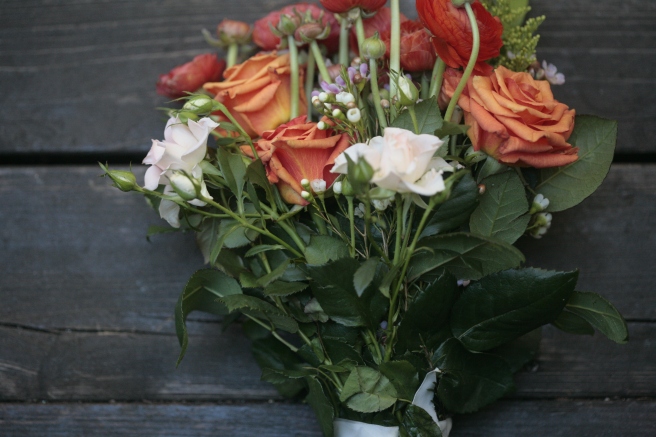 We got almost all of the food from local farms, but unfortunately there aren’t many local flowers to be had in Mendocino County during February.  Our farm just has a few random calendula blooms, nothing that you could turn into a bridal bouquet.  If it were the summertime, I would have absolutely just grown my own.  True, if I had planned in advance, I could have forced some bulbs in the greenhouse or something. I got my wedding dress four days before the wedding, though, so obviously growing my own flowers was just not in the cards for this.  The next best thing? The San Francisco Flower Mart. It’s a huge wholesale market for flowers that’s open to florists in the early morning hours, but then opens to the public at 10:00 a.m. The flowers are incredibly fresh, as local as I think is reasonable to expect in February, and the selection is fantastic.  Oh, and it’s dirt cheap. And there’s a parking lot right at the building. (You have to pay, but it’s only a couple bucks). 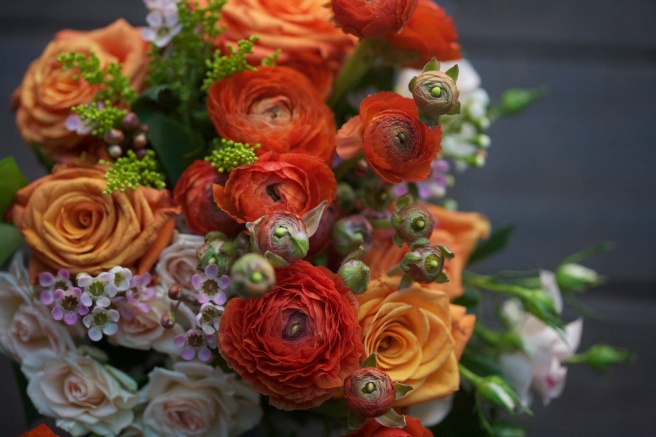 I live two hours away from San Francisco, out in the sticks, and I think it was totally worth the drive to go down and get a couple hundred bucks worth of flowers for bouquets and to decorate the house.   If you’re getting married, live nearish to SF, and want to arrange your own flowers, this is absolutely the route to take. During the summers, I would also suggest local farmers markets, but you probably knew I would say that.

Remember, if you’re shopping for flowers at a market like this, it helps to bring a couple big buckets with water in them so that you can keep the flowers fresh while you drive them back home.  If you get really fresh flowers, they’ll probably last about a week if you keep them in plenty of water and in a cool space.

As far as making your arrangements look nice, it really is up to you. I like a combination of lots of shapes, sizes and colors, but sometimes a bunch of all one variety can look beautiful too. You have to just keep a really open mind when you’re shopping and pick out things that you think look pretty.

The day before the wedding, my sisters and one of my girlfriends put together bouquets and decorated the house.  Obviously, they were all in mason jars, (which is potentially an overused trend, but when you make jam for a living and have shelves and shelves filled with jars, it certainly seems like an obvious choice).  As stereotypical as it was for a bunch of girls to sit around playing with flowers, I don’t care, because it was awesome. Of course, it might not be right for all brides, but I could never imagine paying someone else to sit and arrange flowers for me.

So, that was the simplest bit of information to tell you about…. I have a bunch of really great recipes that I can’t wait to share for all the delicious food we made.  I need to go sleep some more, though, since apparently I’m still hungover, two days later.

*If you have a long engagement and then randomly decide to get married, everyone is going to think you’re pregnant. True story. FYI: I’m not pregnant.