Nothing is coming into focus.  I tried switching lenses. I tried switching from Autofocus to Manual and back again.  Nothing.  My iphone is cool and all, but I really had my heart set on a bunch of pretty macro pictures of mustard seeds and cucumber slices. Now I have to ship it to Canon to get fixed, right when my sunflowers are blooming and there’s all these good projects going on in the kitchen. 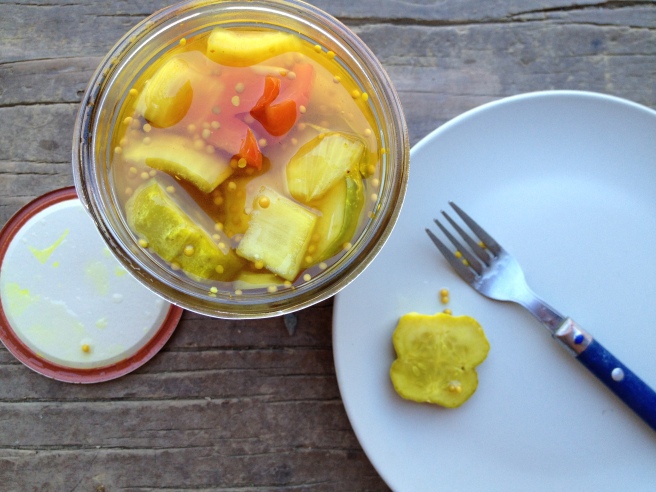 Oh well.  So I apologize for the delay in announcing this month’s Cook it! 2012 Resolution, which, as you may realize by now, is…

This was another month where I was tempted to tackle a more complicated project, but since the summer months are apparently really busy, I wanted to make sure that I stuck to the basics.  Specifically, finding time to get some cucumbers into jars.  I’ve made plenty of pickles, but somehow, last year it just never happened.  Which is crazy, since they’re so easy to make, and I think bread and butter pickles are so vital to being alive that I’ll gladly fork over $5.50 for a good jar at the Natural Food Store.

My cucumbers are awful this year, but I bartered some eggs with one of my friends and ended up with a garbage bag full of beautiful pickling cucumbers from his garden.  (When he said “I hope you’re prepared for this” to me on the phone, I answered with an emphatic “I can’t wait” but once I started packing the jars, I realized that we’re going to have pickles to last well into the apocalypse now.  I guess that’s a good thing, though).

Bread & Butter Pickles, adapted from the recipe in the Fannie Farmer cookbook

FYI: These pickles are cool because they’re sweetened with maple syrup.

Cook Time: 3 1/2 hrs (including time for the cucumbers to sweat)

Combine the cucumbers, onions, bell peppers in salt in a nonreactive container.  Cover and refrigerate for 3 hours.*  After the time is up, drain in a colander and rinse everything very thoroughly with cold water.

Bring boiling water canner to a boil.  Sterilize 4 clean pint jars.  Put the clean lids and rings into a small pot, cover with water, bring to a simmer, then turn off the heat.

Combine the ingredients for the brine in a pot on the stove.  Bring to a boil, then turn the heat down and simmer for 5 minutes.   Pack the prepared vegetables into the sterilized jars, leaving 1/4″ headspace.  Cover with hot brine (leaving 1/4″ headspace still).  Poke around the jars with a chopstick to remove air bubbles and then adjust the headspace with more brine if necessary.  Wipe rims clean and screw on lids.

Process for 10 minutes, adjusting for altitude if necessary.

*This is not something that you can let sit for longer and have it be better.  The salt soaks into the cucumbers and then it’s impossible to rinse off.  And then they taste disgusting.