Have you ever been in that awkward social situation where you’ve bragged to some random person that you know how to sew your own dresses, you make a pot of coq au vin that tastes better than Julia’s, you have a whole garden of award winning rose bushes, and that you make the best jar of peach jam in the history of jam?

Then random person says: “ooh I love jam, bring me some and let me try it!”

Well, I can’t help you with most of those things, but the jam…  I got your back on this.

This is the best peach jam. Ever. 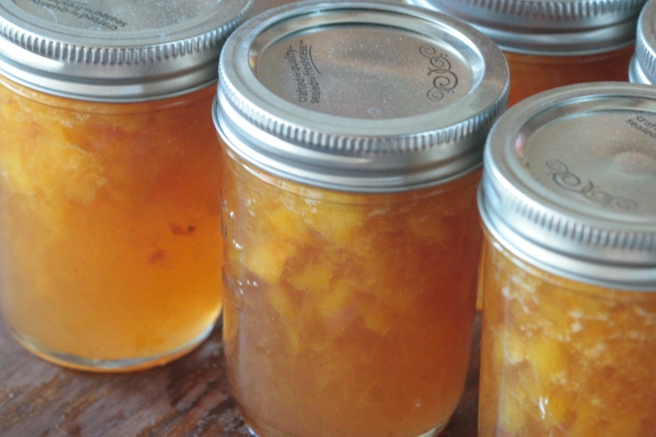 This jam has just a few simple ingredients that magically conjure up all kinds of images of summer barbeques and peach pie, fireflies, swimming in lakes under leafy green trees, laughter and whatever that dish was that your grandma made that was so delicious. Crack this jar open in December and it will work miracles in those dark winter hours.

For any beginning jammers out there, read past the recipe for step-by-step instructions that should work for the most inexperienced home cook. 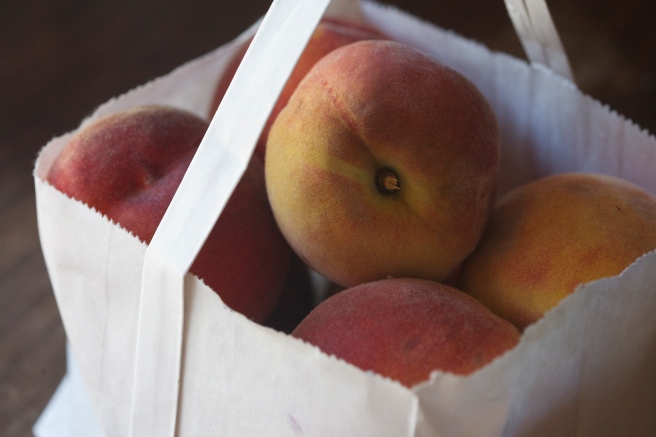 Cook Time: about an hour

Bring boiling water canner to a boil. Sterilize jars and lids.  In a small bowl, whisk together pectin and 1/2 c. sugar.  In a large, non-reactive pot, combine peaches, lemon juice, vanilla bean and the pectin-sugar mixture. Bring to a full boil and then pour in the remaining 3 c. sugar. Keep the heat on high, stir fairly often to prevent the fruit from sticking to the bottom of the pan, and bring the jam back to a full rolling boil. Cook for exactly one full minute while at a boil, then remove from the heat.  Ladle jam into sterilized jars leaving 1/4″ headspace. Wide rims clean and screw on the lids. Process for 10 minutes.

Try this jam on poundcake, in turnovers, or just in peanut butter and jelly sandwiches. 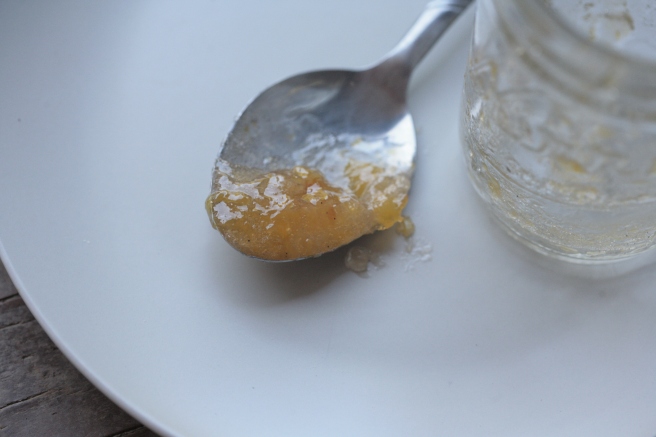 If you’ve never made jam before, you’ll need the following items to get started:

…things you probably own already, part of the canning mise-en-place that you’ll want to get out before you start cooking. Jamming goes very quickly and you don’t want to be running around the kitchen while you have a pot of boiling fruit cooking.

Now that you’ve gathered everything together, let’s get started.

Sterilize Your Jars and Lids

Some recipes may say that if you’re processing (putting the jars in the boiling water bath) the jam that you don’t need to sterilize the jars. I think it’s much easier always to sterilize them, just to be safe. This step is also beneficial because you want the jars to be hot while you’re working with them. If you put boiling hot jam into a cold jar and then put it into a boiling hot water bath, the jar will crack and break, and jam will go everywhere, and you’ll be really sad cleaning it all up.

That said, there are several ways to sterilize jars, but I use the oven. Wash them in soapy water and then put them on a cookie sheet in the oven set at 225 degrees. Make sure they’re in for atleast 20 minutes. 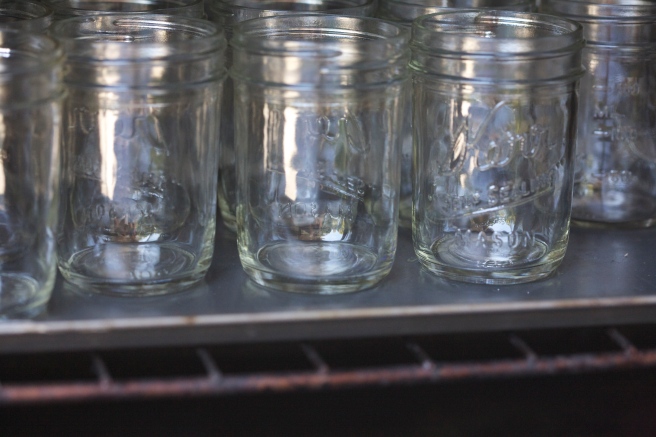 At this same time, I put on a kettle of water to boil and fill my boiling water canner with clean water and turn it on to boil. 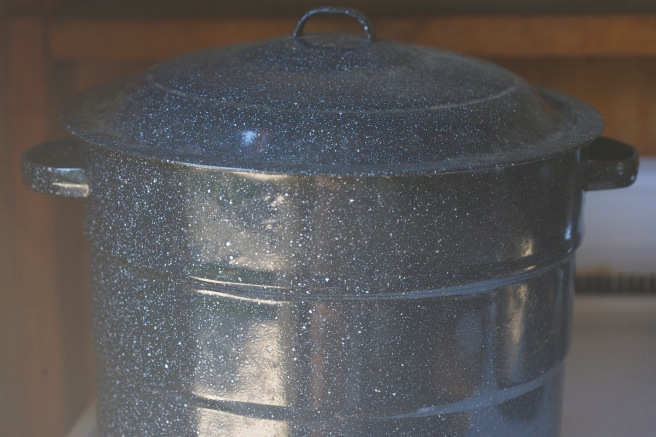 Wash your lids and rings in soapy water. (Note: Never re-use old ones because the sealing compound won’t necessarily work right twice.) Put the lids in a bowl and cover with boiling water from the kettle. Set them aside until you’re ready to use them. 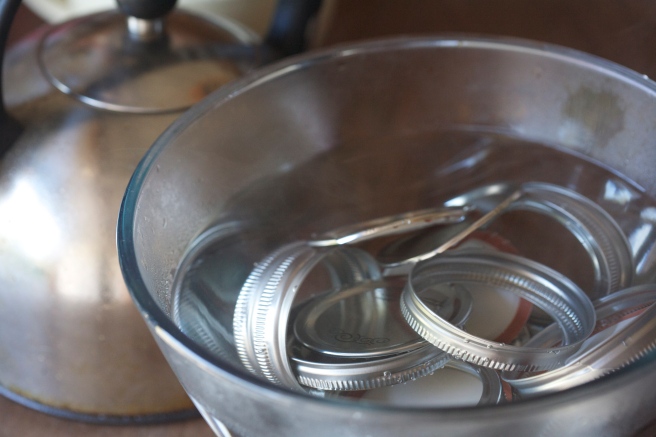 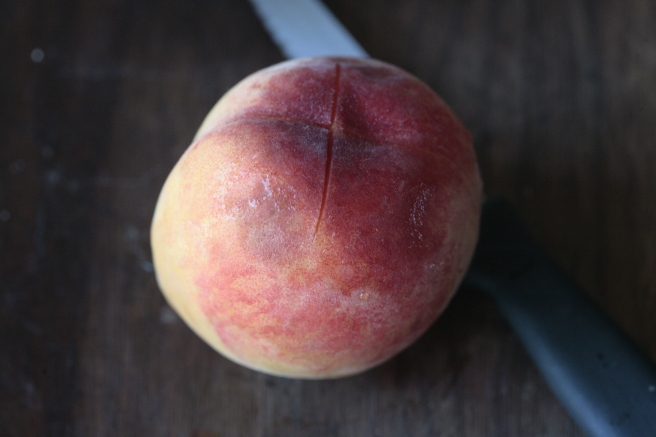 Once the water comes to a boil, blanch the peaches for just about 30 seconds- too long will start to cook them, and that’s not what we want. The goal is to see the little pieces of skin around the cuts start to loosen. Drain the peaches, and then if you hold the peach under running water the skin should slip right off. Try to be as efficient as possible, since you don’t want to rinse all of the flavor and peach juice off, just the skin.  Dice ’em up and the hard part is done!

Put the diced peaches into your non-reactive pot along with 2 tbs. lemon juice.  Then you’re going to want to whisk together the powdered pectin with a half-cup of sugar to avoid having the pectin clump together in the fruit mixture.  Put the pectin-sugar mixture into the pot with the peaches. And now, the secret ingredient: Whole vanilla bean tends to do some really amazing things to a batch of jam. They’re quite expensive, so I’ve only used 1/3 in this recipe, but feel free to go heavy on it if you want. To prepare the vanilla bean, slice off the section you’re using, then gently run a knife down it to slice into the middle of the bean. Scrape the bean with your knife and you’ll see tiny black seeds building up on the knife-edge. Scrape the seeds into the pot of fruit. After I do this, I put in the scraped bean too, just in case I’ve missed any. Everything should be in your jam pot now. Measure out the remaining three cups of sugar and set it aside so you have it ready for when you need it.

Give the peaches few stirs to combine everything together, and then turn on the heat to high (or medium-high, if your stove has a big flame). Bring it all to a full, rolling boil, stirring occasionally to prevent it from sticking.  Quickly stir in the remaining three cups of sugar that you set aside earlier.  Bring the jam back to a full, rolling boil. Keep stirring fairly often to prevent sticking. This is one of the moments in the jam-making process that a lot of beginning jammers can make mistakes. I don’t mean a gentle simmer.  The jam should be boiling furiously, and when you stir everything it will just keep boiling away. Cook it at this full boil for exactly one minute: too short, and the jam won’t set, too long and it will be like a gummy bear.

Remove the pot from the heat now. It will be frothy on top but wait a few moments and a lot of the bubbles with dissipate. Use a spoon to skim any remaining foam off into a separate jar if there’s a lot left still. Remove the vanilla bean and set it aside.  Then ladle the hot jam into your hot, sterilized jars, filling them to 1/4″ of the very top. (This is called “headspace” and varies depending on what type of canned good you’re making.) 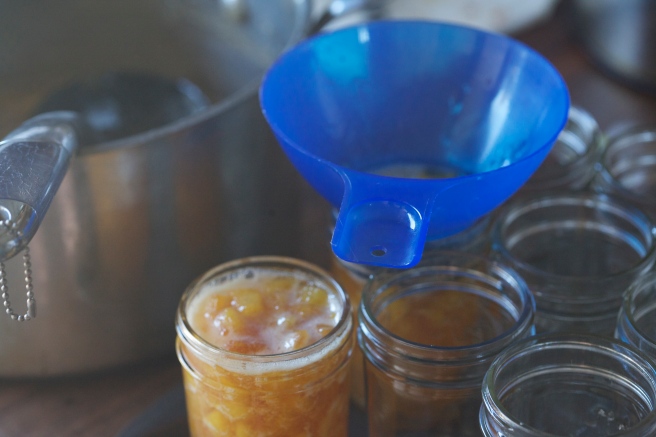 Wipe the rims of the jars clean with a clean kitchen towel or paper towel. This is another possible moment for mistakes.  They rims must be absolutely clean and free of bits of peaches or sugar, otherwise the lids won’t seal and you’ll be sad that you spent so much time chopping peaches to get un-sealed jars. Attach the lids, then use your handy jar lifter to place the jars into your boiling water canner. The term “process” refers to putting the jars in the canner, waiting while they boil for a given amount of time, and then removing them again. Process your jars for 10 minutes.

Remove the jars from the canner and set them on the counter to rest. The lids haven’t sealed yet, so NO TOUCHING. Leave them alone for 12 hours to cool and let the lids seal. You’ll hear a lovely little “ping” when they seal. I have to emphasize: do not press down on the lids when they haven’t sealed yet. For some reason, so many people want to touch them right away. Don’t do it. Go work on a different project. And you’re done!

As one last little note, I’ll mention that every person will have their own subtle variations on how they set up and cook a batch of jam. The fundamentals should be the same, but everyone eventually devises a system that works for them.  If you want to learn more about making jam and all kinds of preserved things, go get your hands on the Ball Complete Book of Home Preserving and you should stay busy for awhile.  Happy jamming!