It’s 4:55 a.m. right now, and I suppose this must be why they invented NyQuil, which I currently have none of. I have lots of other cold medicine, which I am taking, and which doesn’t seem to be particularly effective. By which I mean that it’s completely not doing anything.  So, since I can’t sleep, you know…  I might as well write my Charcutepalooza Bacon Challenge Post. Right? (NO? I should go back to bed? Lies. The bed is not working for me right now). 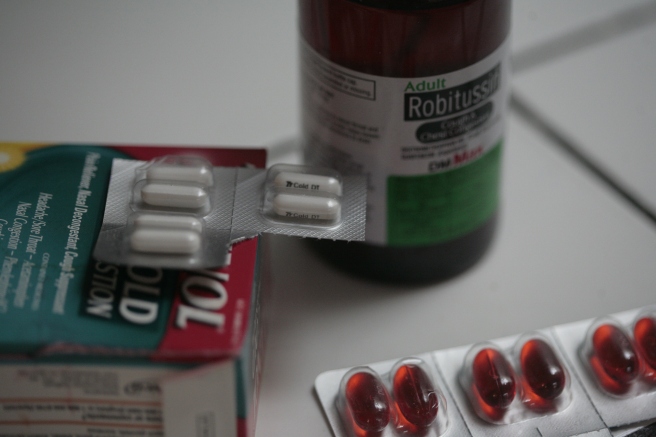 For the February Charcutepalooza Challenge, we turned fresh pork belly into delicious, home-cured bacon.  It was a Star Wars Meets Lord Of The Rings-style epic journey trying to get my hands on fresh pork belly and the pink salt needed for the curing process.  I know a lot of farms that raise pigs, but for some strange, strange reason, everyone that I called wanted to – get this- keep their pork belly and sell the bacon since bacon basically sells like winning lottery tickets, or free vacations to Hawaii, or, you know…. NyQuil if they were in my house right now. The point is, bacon is one of the most popular items at all the local farmers markets, with vendors often unable to even fill the existing demand, and no one had any spare pork belly lying around.  Totally weak.

Well, I ended up being in San Francisco, and I went to a great butcher shop that had piles and piles of it, right there, all for me.  Normally I like to know exactly where my meat came from, but there was a bit of a language barrier.  Even getting past “Do you sell pork belly?” and “Yes we do” was pretty impressive, so I bought two and considered it a victory.

Back when I didn’t have the flu, or whatever this is, I kind of intended on writing a little something about how supporting local specialty shops is a great thing to do, and how often do you find a proper butcher shop where they have high quality meats and they do all the butchering right there, on site, and you can talk to the butcher about the different cuts of meat and…. blah blah blah.  You see the pictures.  That meat looks darned good– try to find that at Safeway.

So, first we had to find a special type of salt (Sodium Nitrite? I can’t remember. It’s pink, and usually just called Pink Salt).  The organic folks don’t always like sodium nitrite, since it’s definitely not organic, but in Charcuterie, Michael Ruhlman tells us that it’s completely safe in small quantities, and that you just wouldn’t want to use it like table salt. Which is why it’s bright pink, so that you don’t accidentally season your next big pot of soup with it. That salt was super hard to find, but for any San Francisco Bay Area folks, I finally found it at Village Market in the Ferry Building.  For people who actually plan in advance (the horror!)  the internet is also an available solution which doesn’t involve traffic, parking, lines, etc.

Once you finally have the pork belly and pink salt, the basic idea is to season the pork belly with a salt rub and then let it sit in the fridge for a week. (For the full set of instructions, refer to Charcuterie, by Michael Ruhlman).

When the week is up, the pork belly is slow roasted in a low oven for a few hours.

After that, you’ve officially made bacon, and you’re ready to cut of a piece, fry it up, and eat it!

What to make with bacon, well, besides the obvious?

I think the real question is, what would I not make with bacon? (Sorry Deborah Madison.  I love your cookbooks but I am putting bacon in with those veggies.)  Back before I got sick, I had nice ideas about making some kind of pasta dish, with roasted pumpkin from the garden and bacon lardons, maybe some toasted nuts, fresh parsley, some asiago cheese…

The Fever and the Cold Medicine say that we’re making Bacon Cheeseburgers and that all that vegetable stuff is for losers. 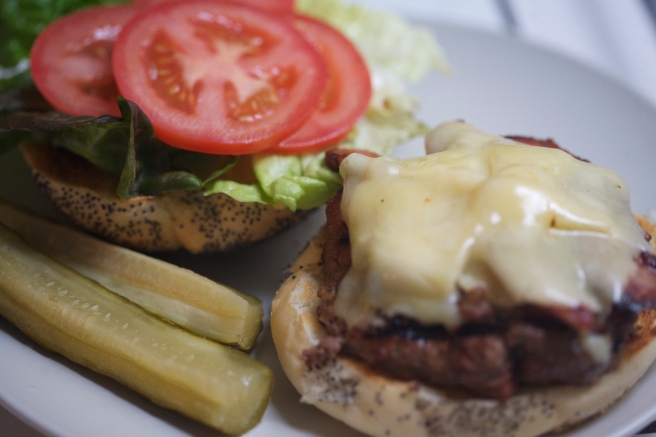 These are the BEST cheeseburgers! I think the only reason I’m really sharing this recipe is all the cold medicine, usually it’s a big secret.  These burgers are juicy and packed with flavor (and super bad for you!)  Also, there’s a secret ingredient- grated fresh tomato! I stole this from a Middle-Eastern kebab recipe, because it’s works well in burgers too, and adds a ton of extra flavor and moisture.

In the winter I use a cast-iron grill pan to cook these burgers. In the summer, they go outside on the Weber grill.  You could also sear them in a cast iron skillet and then put them in the oven for about 10 minutes if you don’t own a grill pan.

1. I like to preheat my grill pan on very low heat.  Turn on the flame and using a clean cloth, rub grapeseed oil all over the grill.  Any other high-heat oil will work (like canola oil).

2. Using the large holes in a box grater, grate the tomato and onion and put the resulting pulp in a bowl.  It will be watery and messy, just dump it all in the bowl.

3. Add the other ingredients for the burger to the bowl with the tomato and onion.  Using your hands (wash them first!), fold all the ingredients together gently, trying not to overwork the meat, but still making sure everything is well-incorporated. 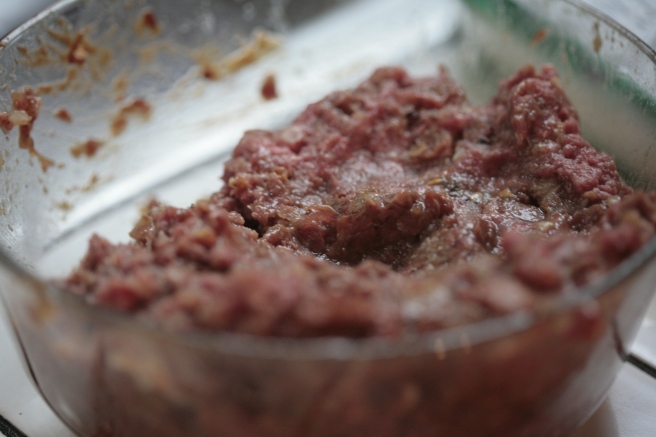 4. Form the mixture into six patties and set on a clean plate until you are ready to grill (these could be made in advance, if you wanted, and put in the fridge now).

5. On medium heat, grill for about 4 minutes on each side, or until burgers are cooked to medium.  When they’re two minutes away from being done, layer two bacon slices and about an ounce of cheese on top of the burgers, and cover for a minute to melt the cheese. (I just use big lid from a different pan, since grill pans don’t really have covers).  Very important: Since these burgers have a ton of moisture in them, they will fall apart easily on the grill.  Don’t mess with them! Just put it on the grill, wait four minutes, flip it, wait four minutes, and put it on a bun. Don’t rearrange the grill 900 times while you’re waiting for them to finish.

6. Arrange the burgers on toasted buns with whatever toppings you like, and serve with pickles. Be happy.

3 thoughts on “When Life Hands You Lemons, Take A Bunch Of Cold Medicine And Make Bacon Cheeseburgers”